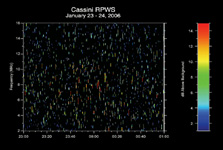 Click on the image for
Lightning Sounds from Saturn

This audio clip was created from radio signals received by the radio and plasma wave science instrument on the Cassini spacecraft. The bursty radio emissions were generated by lightning flashes on Saturn and are similar to the crackles and pops one hears on an AM radio during a thunderstorm on Earth. This storm on Saturn occurred on January 23 and 24, 2006. The clip compresses two hours of observations into about 28 seconds. Therefore, every second of the audio clip corresponds to about 4 minutes, 18 seconds.

The Cassini-Huygens mission is a cooperative project of NASA, the European Space Agency and the Italian Space Agency. The Jet Propulsion Laboratory, a division of the California Institute of Technology in Pasadena, manages the mission for NASA's Science Mission Directorate, Washington, D.C. The Cassini orbiter was designed, developed and assembled at JPL. The radio and plasma wave science team is based at the University of Iowa, Iowa City.

For more information about the Cassini-Huygens mission, visit http://saturn.jpl.nasa.gov/home/index.cfm and the instrument team's home page, http://www-pw.physics.uiowa.edu/cassini/ .