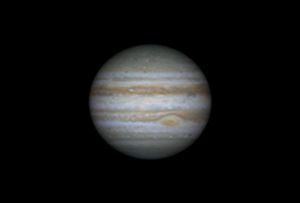 NASA's Cassini spacecraft took narrow-angle images of Jupiter's outer atmosphere, showing the giant planet as if it were constantly bathed in sunlight. To make this 3-D movie sequence (of which the release image is a still frame), projections of the movement of the atmosphere were inserted between frames, then projected on to a globe matching Jupiter's size and shape. The interpolated data came from studies by a previous mission to Jupiter, NASA's Voyager spacecraft. The movie shows one frame every 1.1 hours, over 10 days, from October 31 to November 9, 2000.