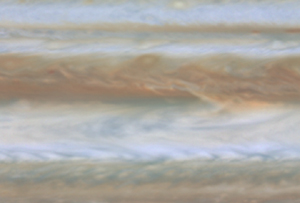 In this movie clip (of which the release image is a still frame), created from images taken by NASA's Cassini spacecraft, the blue region in the center is a relatively cloud-free area where thermal radiation from warmer, deeper levels emerges. NASA's Galileo probe in 1995 entered Jupiter's atmosphere in a similar area.