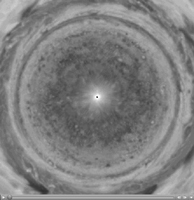 Bands of eastward and westward winds on Jupiter appear as concentric rotating circles in this movie composed of Cassini spacecraft images that have been re-projected as if the viewer were looking down at Jupiter's north pole and the planet were flattened.

The sequence covers 70 days, from October 1 to December 9, 2000. Cassini's narrow-angle camera captured the images of Jupiter's atmosphere in the near-infrared region of the spectrum.

What is surprising in this view is the coherent nature of the high-latitude flows, despite the very chaotic, mottled and non-banded appearance of the planet's polar regions. This is the first extended movie sequence to show the coherence and longevity of winds near the pole and the features blown around the planet by them.

There are thousands of spots, each an active storm similar to the size to the largest of storms on Earth. Large terrestrial storms usually last only a week before they dissolve and are replaced by other storms. But many of the Jovian storms seen here, while occasionally changing latitude or merging with each other, persist for the entire 70 days. Until now, the lifetime of the high-latitude features was unknown. Their longevity is a mystery of Jovian weather.

Cassini collected images of Jupiter for months before and after it passed the planet on December 30, 2000. Six or more images of the planet in each of several spectral filters were taken at evenly spaced intervals over the course of Jupiter's 10-hour rotation period. The entire sequence was repeated generally every other Jupiter rotation, yielding views of every sector of the planet at least once every 20 hours.

The images used for the movie shown here were taken every 20 hours through a filter centered at a wavelength of 756 nanometers, where there are almost no absorptions in the planet's atmosphere. The images covering each rotation were mosaiced together to form a cylindrical map extending from 75 degrees north to 75 degrees south in latitude and covering 360 degrees in longitude. The movie consists of 84 such maps, spanning 70 Earth days in time or 168 Jupiter rotations.

Transforming the cylindrical maps into polar stereographic projections produces a movie of what Jupiter would look like if viewed from the pole. Jupiter's alternating eastward and westward jet streams flow in concentric rings around the pole, with equatorial motions visible in the corners. The dark features flowing counterclockwise near the equator are "hot spots" where cloud cover is relatively thin.

The high-latitude movements call into question one notion concerning wind circulation on Jupiter. The model in question suggests that Jupiter'a alternating bands of east-west winds are the exposed edges of deeper rotating cylinders that extend north-south through the planet. However, the east-west winds that the movie shows in polar regions don't fit that model. The cylinders whose edges would form those bands would have to go through the innermost portion of the planet, where the cylinders' different rotations could not be maintained. Jupiter's wind pattern may involve a mix of rotation-on-cylinders near the equator and some other circulation mechanism near the poles.

Cassini is a cooperative project of NASA, the European Space Agency and the Italian Space Agency. The Jet Propulsion Laboratory, a division of the California Institute of Technology in Pasadena, manages the Cassini mission for NASA's Office of Space Science, Washington, D.C.