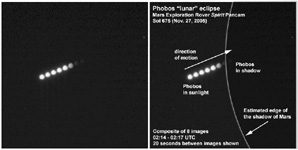 NASA's Mars Exploration Rover Spirit observed the Martian moon Phobos entering the shadow of Mars during the night of the rover's 675th sol (Nov. 27, 2005). The panoramic camera captured 16 images, spaced 10 seconds apart, covering the period from when Phobos was in full sunlight to when it was entirely in shadow. As with our own Moon during lunar eclipses on Earth, even when in the planet's shadow, Phobos was not entirely dark. The small amount of light still visible from Phobos is a kind of "Mars-shine" -- sunlight reflected through Mars' atmosphere and into the shadowed region.

This view is a time-lapse composite of images taken 20 seconds apart, showing the movement of Phobos from left to right. (At 10 seconds apart, the images of the moon overlap each other.) Scientists are using information about the precise timing of Martian moon eclipses gained from observations such as these to refine calculations about the orbital path of Phobos. The precise position of Phobos will be important to any future spacecraft taking detailed pictures of the moon or landing on its surface.