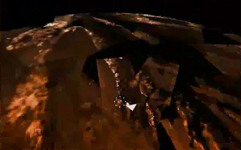 Click on the image for the
Huygens Landing Site Movie

This movie shows a quick succession of multiple products of Titan's surface from the Cassini orbiter and the European Space Agency's Huygens probe. It shows Cassini imaging science sub-system images, radar images and visual and infrared mapping spectrometer images of the Huygens probe landing area. The rest of the movie consists of mosaics from the descent imager/spectral radiometer. The camera system on the Huygens probe mimics the descent profile of the probe starting at about 144 kilometers (89 miles), looking eastward throughout. It displays the Titan surface in true color. The sequence ends with a true-color surface image. The radar images of the Huygens landing site were taken by the Cassini orbiter radar instrument during the Titan flyby on Oct. 28, 2005.

The probe was delivered to Saturn's moon Titan by the Cassini spacecraft, which is managed by NASA's Jet Propulsion Laboratory, Pasadena, Calif. NASA supplied two instruments on the probe, the descent imager/spectral radiometer and the gas chromatograph mass spectrometer.

The Cassini-Huygens mission is a cooperative project of NASA, the European Space Agency and the Italian Space Agency. The Jet Propulsion Laboratory, a division of the California Institute of Technology in Pasadena, manages the mission for NASA's Science Mission Directorate, Washington, D.C.

For more information about the Cassini-Huygens mission visit http://saturn.jpl.nasa.gov .