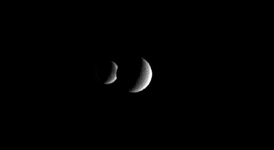 Click on the image for
Rhea Eclipses Dione Movie

The images used for this movie sequence were taken over approximately 27 minutes as Cassini stared at Rhea. The images were aligned to keep Rhea close to the center of the scene. Additional frames were inserted among the 38 original Cassini images in order to smooth the appearance of Dione's movement -- a scheme called interpolation. For another eclipse movie showing these two moons, see PIA06199 .