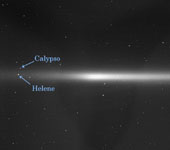 This excellent view of the faint E ring -- a ring feature now known to be created by Enceladus -- also shows two of Saturn's small moons that orbit within the ring, among a field of stars in the background.

Calypso and Helene are trojan satellites, or moons that orbit 60 degrees in front or behind a larger moon. Calypso is a Tethys trojan and Helene is a trojan of Dione.

An interesting feature of note in this image is the double-banded appearance of the E-ring, which is created because the ring is somewhat fainter in the ringplane than it is 500-1,000 kilometers (300-600 miles) above and below the ringplane. This appearance implies that the particles in this part of the ring have nonzero inclinations (a similar affect is seen in Jupiter's gossamer ring). An object with a nonzero inclination does not orbit exactly at Saturn's ringplane. Instead, its orbit takes it above and below the ringplane. Scientists are not entirely sure why the particles should have such inclinations, but they are fairly certain that the reason involves Enceladus.

One possible explanation is that all the E ring particles come from the plume of icy material that is shooting due south out of the moon's pole. This means all of the particles are created with a certain velocity out of the ringplane, and then they orbit above and below that plane.

Another possible explanation is that Enceladus produces particles with a range of speeds, but the moon gravitationally scatters any particles that lie very close to the ringplane, giving them nonzero inclinations.

Stray light within the camera system is responsible for the broad, faint "Y" shape across the image.

The image was taken in visible light with the Cassini spacecraft wide-angle camera on March 15, 2006, at a distance of approximately 2.4 million kilometers (1.5 million miles) from Saturn. The image scale on the sky at the distance of Saturn is 142 kilometers (88 miles) per pixel.