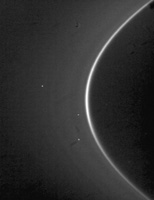 Click on the image for movie of
Rounding the Corner

A movie sequence of Saturn's G ring over a full orbital revolution captures its single bright arc on the ring's inner edge.

The movie is composed of 70 individual narrow-angle camera images taken during a period of just over 20 hours while Cassini stared at the ring. The orbital period for particles in the center of the G ring is about 19.6 hours.

At the beginning of the sequence, the ring arc, a site of concentrated ring particles, is seen rounding the ring edge.

The arc orbits at a distance of 167,496 kilometers (104,080 miles). Itis about 250 kilometers (155 miles) wide in radius and subtends less than 60 degrees of orbital longitude. The classical position of the G ring is about 172,600 kilometers (107,250 miles) from Saturn, and the arc blends smoothly into this region. Scientists suspect that bodies trapped in this remarkably bright feature may be the source of the G ring material, driven outward from the arc by electromagnetic forces in the Saturn system.

The arc itself is likely held in place by gravitational resonances with Mimas of the type that anchor the famed arcs in Neptune's rings. There is an obvious narrow dark gap in the G ring beyond the arc. This feature is close to yet another resonance with Mimas, but no arcs are present at this locale.

This view looks toward the unlit side of the rings from about 10 degrees above the ringplane. Imaging artifacts jitter within the scene, a result of the high phase angle and faintness of the G ring. Stars slide across the background from upper left to lower right.

The images in this movie were taken on Sept. 19 and 20 at a distance of approximately 2.1 to 2.2 million kilometers (1.3 to 1.4 million miles) from Saturn and at a Sun-G ring-spacecraft, or phase, angle that ranged from 167 to 164 degrees. Image scale is about 13 kilometers (8 miles) per pixel in the radial (outward from Saturn) direction.