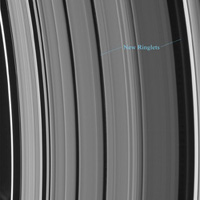 High-resolution Cassini images show an astonishing level of structure in Saturn's Cassini Division, including two ringlets that were not seen in NASA Voyager spacecraft images 25 years ago.

This image shows a new ringlet at right, just interior to the bright outer edge of the Cassini Division. This diffuse structure is about 50 kilometers (31 miles) wide.

The second new ringlet is roughly at center in this view. It is a very narrow feature, about 6 kilometers (4 miles) wide, between the familiar broad bands of material in the Cassini Division, and displays a great deal of variation in brightness along its length. (We include here an annotated version of this image indicating the new rings.)

This image was taken in visible light with the Cassini spacecraft narrow-angle camera on Sept. 9, 2006, at a distance of approximately 414,000 kilometers (257,000 miles) from Saturn. This view looks toward the lit side of the rings from about 17 degrees below the ringplane. The phase angle, or sun-Saturn-spacecraft angle, was 96 degrees. Image scale on the sky at the distance of Saturn is 2 kilometers (1 mile) per pixel.