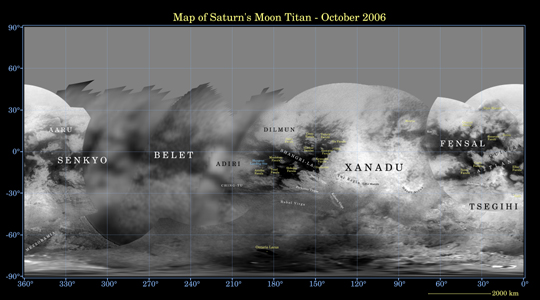 The data here consist of images taken using a filter centered at 938 nanometers, allowing researchers to examine albedo (or inherent brightness) variations across the surface of Titan. Due to the scattering of light by Titan's dense atmosphere, no topographic shading is visible in these images.

The map is an equidistant projection and has a scale of 2 kilometers (1.25 miles) per pixel. Equidistant projections preserve distances on a body, with some distortion of area and direction. Actual resolution varies greatly across the map, with the best coverage (close to the map scale) near the center and edges of the map and the worst coverage on the trailing hemisphere (centered around 270 degrees west longitude).

Coverage should improve in some of the poorly covered areas starting in February 2007, when northern Belet, Adiri, and Dilmun will be imaged. Imaging coverage in the northern polar region, currently blank on this map, will improve over the next few years, as Titan approaches vernal equinox in August 2009.

The mean radius of Titan used for projection of this map is 2,575 kilometers (1,600 miles). Until a control network is created for Titan, the satellite is assumed to be spherical.

The named features are designated by the International Astronomical Union. (A "facula" on Titan is a bright spot; a "macula" is a dark spot.)

This map demonstrates how our knowledge of Titan's surface has been vastly improved since Cassini arrived and began mapping the outsize moon. See PIA06086 for an earlier Cassini map of Titan.