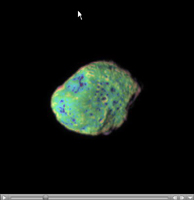 Click on the image for movie of
Multicolor Hyperion

Saturn's moon Hyperion appears to tumble toward Cassini in this movie that shows variations in color across the moon's surface.

The movie was created from 14 frames and represents about 12 hours as the spacecraft encountered Hyperion in early 2006. Most of the observable motion is due to the spacecraft's trajectory during the flyby.

The dark areas in the bottoms of craters are seen on all parts of Hyperion.

To create the false-color view in each frame, ultraviolet, green and infrared images were combined into a single picture that isolates and maps regional color differences. This "color map" was then superimposed over a clear-filter image that preserves the relative brightness across the body.

The combination of color map and brightness image shows how colors vary across Hyperion's surface. The origin of the color differences is not yet understood, but may be caused by subtle differences in the surface composition or the sizes of grains making up the icy surface material.