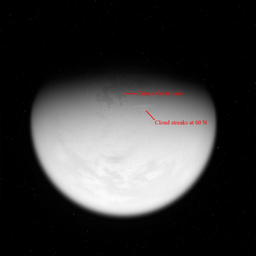 This view of Titan taken on Feb. 25, 2007, reveals a giant lake-like feature in Titan's North Polar Region. It is approximately 1,100 kilometers (680 miles) long and has a surface area slightly smaller than that of Earth's largest lake, the Caspian Sea.