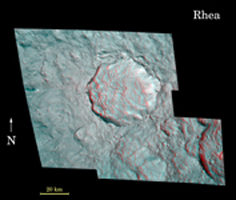 Rhea's surface gains some depth in this stereo image, or anaglyph, which features the bright and geologically young-looking rayed crater on the moon's leading hemisphere. The view was created from images taken during Cassini's close encounter with Rhea (1,528 kilometers, or 949 miles across) on Aug. 30, 2007.

The crater is 48 kilometers (30 miles) wide, and its rays extend several hundred kilometers outward. The rim of this crater is quite sharply defined, and there are few small craters overprinted onto it. These characteristics, along with the brightness of the crater and its rays are indicative of a feature formed relatively recently in geologic history.

The hummocky floor of the crater possesses a central peak and clusters of small craters. The little craters may be secondary impact sites, formed by ejecta from the primary impact that landed in the crater, or they could have been formed by material that had broken off of the body that struck Rhea.

For an even higher resolution view of this feature, see PIA07764 .

This stereo image is a mosaic consisting of seven Cassini spacecraft narrow-angle camera images. The view is an orthographic projection centered on 12 degrees south latitude, 112 degrees west longitude and has a resolution of 45 meters (148 feet) per pixel. An orthographic view is most like the view seen by a distant observer looking through a telescope. North is up.