The North Polar Region of Enceladus 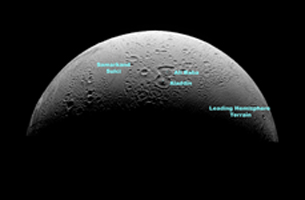 This three-image mosaic is the highest resolution view yet obtained of Enceladus' north polar region. The view looks southward over cratered plains from high above the north pole of Enceladus.

Cassini's March 2008 flyby of Enceladus was designed to directly investigate the ongoing plume activity at the moon's south pole, but the path of the spacecraft allowed investigation of older evidence for internal activity near the north pole.

Compared to much of the moon's southern hemisphere—the south polar region in particular—the north polar region is much older and covered with craters. These craters are captured at different stages of disruption and alteration by tectonic activity and probably past heating from below. Many of the craters seen here are sliced by small parallel cracks that seem to be ubiquitous throughout the old cratered terrains on Enceladus. The mosaic also shows a variety of impact crater shapes, some with bowed-up floors and smaller craters within, very likely indicating that the icy crust in this area was at some time warmer than at present. While this conclusion was previously reached from NASA Voyager spacecraft images, these new data provide a much more detailed look at the fractures that modify the surface. This data will give a significantly improved comparison of the geologic history at the satellite's north pole with that at the south pole.

Two prominent craters in this view, Ali Baba and Aladdin (the two overlapping craters near center), are among the largest craters known on Enceladus.

Several areas of much younger terrain are visible in this mosaic, including Samarkand Sulci, an area of disrupted terrain that runs north-south at left of center, and the "leading hemisphere terrain," a region, seen at right, filled with tectonic fractures, ridges and "ridged terrain."

Samarkand Sulci slices through some prominent craters that were seen in Voyager images. At that time, it was thought that the portions of the craters that extend into Samarkand were completely destroyed by whatever process formed Samarkand. However, Cassini images show remnants of the crater rims that have survived. This new insight provides a benchmark for measuring how tectonic processes modify older terrains, and will also help imaging scientists develop a more accurate timeline for the geologic history of these terrains.

Lit terrain seen here is on the Saturn-facing hemisphere of Enceladus (505 kilometers, or 314 miles across).

The image was taken in visible light with the Cassini spacecraft narrow-angle camera on March 12, 2008. The view was acquired at a distance of approximately 32,000 kilometers (20,000 miles) from Enceladus and at a Sun-Enceladus-spacecraft, or phase, angle of 115 degrees. Image scale is 176 meters (577 feet) per pixel.