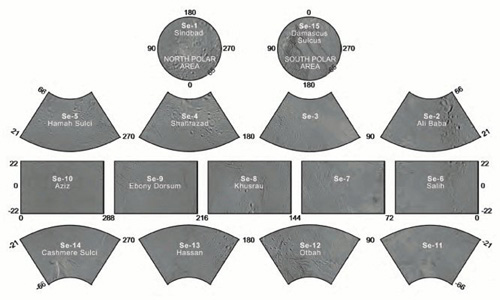 Presented here is a complete set of cartographic map sheets from a high-resolution Enceladus atlas, a project of the Cassini Imaging Team.

The map sheets form a 15-quadrangle series covering the entire surface of Enceladus at a nominal scale of 1:500,000. An index for the atlas is included here, along with an unlabeled version of each terrain section. The map data was acquired by NASA's Cassini spacecraft, imaging science sub-system. The mean radius of Enceladus used for projection of the maps is 252.1 kilometers (156.6 miles). Names for features have been approved by the International Astronomical Union (IAU).

***ERRATA (2008-12-15):The longitude system according to Davies and Katayama (1983) and adopted by the IAU/IAG (International Astronomical Union/International Association of Geodesy) Working Group on Cartographic Coordinates and Rotational Elements as standard is defined by crater Salih at 5 degrees west. To be consistent with this definition, the final controlled mosaic was shifted by 3.5 degrees to the west. This was not possible for the earlier version of the Enceladus atlas from 2006 since crater Salih was imaged for the first time with high resolution during the flybys in 2008. The south pole map (map sheet #15) was shifted in the 2008 version, we plan to release a complete new atlas sometime in 2009.