Odysseus on the Edge 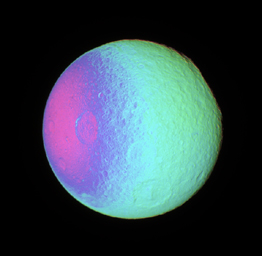 These side-by-side natural color and false-color views show cratered terrain on the anti-Saturn hemisphere of Tethys -- the side that always faces away from Saturn.

The rim of the immense impact basin of Odysseus (450 kilometers or 280 miles across) lies on the eastern limb, at the 2 o'clock position, making the limb there appear flatter than elsewhere. Other large craters seen here are Penelope (left of center) and Melanthius (below center).

The region between Penelope and Odysseus has not previously been imaged at such high resolution before.

To create the false-color view, ultraviolet, green and infrared images were combined into a single picture that isolates and maps regional color differences. This "color map" was then superimposed over a clear-filter image that preserves the relative brightness across the body.

The combination of color map and brightness image shows how colors vary across the surface of Tethys. The origin of the color differences is not yet understood, but may be caused by subtle differences in the surface composition or the sizes of grains making up the icy surface material.

The images were taken with the Cassini spacecraft narrow-angle camera on Dec. 31, 2006 at a distance of approximately 414,000 kilometers (257,000 miles) from Tethys. Image scale is 2 kilometers (2 miles) per pixel.