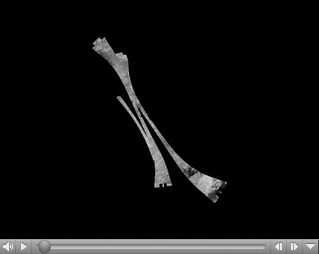 Click on the image for movie of
Titan Lakes Movie

The most striking discovery from these flybys was the near-polar hydrocarbon lakes, which are far darker than the surrounding terrain. Ranging in size from a few kilometers up to about 100 kilometers (62 miles) in diameter, they are most likely the result of increased rainfall and decreased evaporation at the cold higher latitudes. Scientists will be looking for signs of change in lake shape in future flybys covering the same area, which may indicate changes in lake level.

For more information about the Cassini-Huygens mission visit http://saturn.jpl.nasa.gov/home/index.cfm .