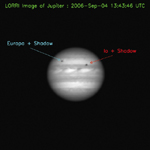 The Long Range Reconnaissance Imager (LORRI) on NASA's New Horizons spacecraft took this photo of Jupiter on Sept. 4, 2006, from a distance of 291 million kilometers (nearly 181 million miles) away.

Visible in the image are belts, zones and large storms in Jupiter's atmosphere, as well as the Jovian moons Europa (at left) and Io and the shadows they cast on Jupiter.

LORRI snapped this image during a test sequence to help prepare for the Jupiter encounter observations. It was taken close to solar opposition, meaning that the Sun was almost directly behind the camera when it spied Jupiter. This makes Jupiter appear about 40 times brighter than Pluto will be for LORRI's primary observations when New Horizons encounters the Pluto system in 2015.

To avoid saturation, the camera's exposure time was kept to 6 milliseconds. This image was, in part, a test to see how well LORRI would operate with such a short exposure time.