On Approach: Jupiter and Io 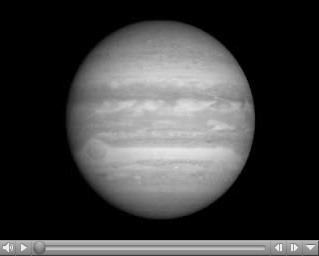 Click on the image for movie of
On Approach: Jupiter and Io

This sequence of images was taken on Jan. 8, 2007, with the New Horizons Long Range Reconnaissance Imager (LORRI), while the spacecraft was about 81 million kilometers (about 50 million miles) from Jupiter. Jupiter's volcanic moon Io is to the right; the planet's Great Red Spot is also visible. The image was one of 11 taken during the Jan. 8 approach sequence, which signaled the opening of the New Horizons Jupiter encounter.

Even in these early approach images, Jupiter shows different face than what previous visiting spacecraft -- such as Voyager 1, Galileo and Cassini -- have seen. Regions around the equator and in the southern tropical latitudes seem remarkably calm, even in the typically turbulent "wake" behind the Great Red Spot.

The New Horizons science team will scrutinize these major meteorological features -- including the unexpectedly calm regions -- to understand the diverse variety of dynamical processes on the solar system's largest planet. These include the newly formed Little Red Spot, the Great Red Spot and a variety of zonal features.