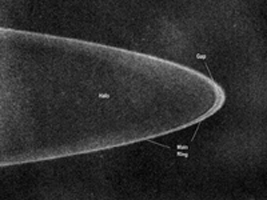 This processed image shows a narrow ring, about 1,000 kilometers (600 miles) wide, with a fainter sheet of material inside it. The faint glow extending in from the ring is likely caused by fine dust that diffuses in toward Jupiter. This is the outer tip of the "halo," a cloud of dust that extends down to Jupiter's cloud tops. The dust will glow much brighter in pictures taken after New Horizons passes to the far side of Jupiter and looks back at the rings, which will then be sunlit from behind.

Jupiter's ring system was discovered in 1979, when astronomers spied it in a single image taken by the Voyager 1 spacecraft. Months later, Voyager 2 carried out more extensive imaging of the system. It has since been examined by NASA's Galileo and Cassini spacecraft, as well as by the Hubble Space Telescope and large ground-based observatories.