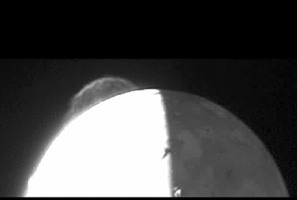 Click on the image for QuickTime movie of
Tvashtar Movie

Using its Long Range Reconnaissance Imager (LORRI), the New Horizons spacecraft captured the two frames in this "movie" of the 330-kilometer (200-mile) high Tvashtar volcanic eruption plume on Jupiter's moon Io on February 28, 2007, from a range of 2.7 million kilometers (1.7 million miles). The two images were taken 50 minutes apart, at 03:50 and 04:40 Universal Time, and because particles in the plume take an estimated 30 minutes to fall back to the surface after being ejected by the central volcano, each image likely shows an entirely different set of particles. The details of the plume structure look quite different in each frame, though the overall brightness and size of the plume remain constant.

Surface details on the nightside of Io, faintly illuminated by Jupiter, show the 5-degree change in Io's central longitude, from 22 to 27 degrees west, between the two frames.