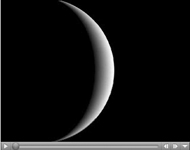 After acquiring hundreds of high-resolution images during close approach to Venus, MESSENGER turned its wide-angle camera back to the planet and acquired a departure sequence. These images provide a spectacular good-bye to the cloud-shrouded planet while also providing valuable data to the camera calibration team. MESSENGER was 60,688 kilometers (37,710 miles) from the planet at the start of the sequence and 89,310 kilometers (55,495 miles) at the end. Initially, images were acquired at a rate of one of every 20 minutes, and then as Venus shrank the timing interval was increased to 60 minutes.

These images represent the last view of Venus by MESSENGER, but they also point toward the spacecraft's first encounter with Mercury in January 2008.