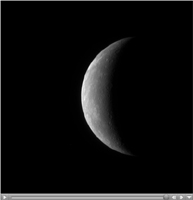 Click on the image for movie of
Rendezvous with Mercury

As the MESSENGER spacecraft approached Mercury for its first flyby, the Narrow Angle Camera, part of the Mercury Dual Imaging System (MDIS) instrument, acquired a series of images of the planet in support of spacecraft navigation. The nine images shown here were taken from January 9 to 13, 2008, as MESSENGER closed to between 2.7 million kilometers and 760,000 kilometers (1.7 million miles and 470,000 miles) from Mercury. These nine images can also be viewed in sequence by clicking on the image above.

At the beginning of the image sequence, Mercury was no more than a bright crescent in the blackness of space. As MESSENGER drew closer, surface features began to be resolved. The image from January 13 (bottom right) has the highest spatial resolution of this sequence (20 kilometers/pixel, 12 miles/pixel). In this image, bright markings are visible, and impact craters can be seen near the terminator (the line between Mercury's day side, to the left, and the night side to the right).

During MESSENGER's closest pass by Mercury yesterday, January 14, 2008, extensive scientific observations were executed. Today, the last of these planned observations will be completed, and at noon EST, the spacecraft will begin to transmit the data gathered during the flyby to Earth. This exciting new dataset will be used to address fundamental questions about the origin and evolution of the planet Mercury and our solar system. Currently, the MESSENGER team is anxiously awaiting the arrival of this dataset.