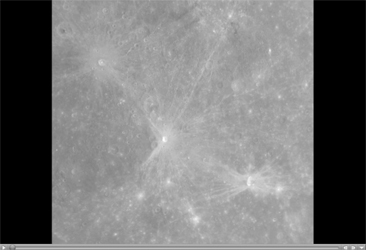 Click on the image for movie of
MESSENGER Departs Mercury

As MESSENGER completed its successful flyby of Mercury, the Narrow Angle Camera (NAC), part of the Mercury Dual Imaging System (MDIS), took images of the planet as the spacecraft departed. Beginning on January 14, 2008, about 100 minutes after MESSENGER's closest pass by the surface of Mercury, until January 15, 2008, about 19 hours later, the NAC acquired one image every four minutes. In total, 288 images were snapped during this time and were compiled sequentially to produce this movie. At the start of the movie, MESSENGER is about 34,000 kilometers (about 21,000 miles) from Mercury, and the first image has a field of view of about 950 kilometers (about 590 miles) in width. At the end of the movie, the MESSENGER spacecraft is a distance of about 440,000 kilometers (270,000 miles) from Mercury.

This movie shows the end of MESSENGER's first encounter with Mercury. MESSENGER will fly by Mercury two additional times during the mission, in October 2008 and September 2009. In March 2011, MESSENGER will enter into an orbit around Mercury and begin a year-long scientific investigation of the planet.