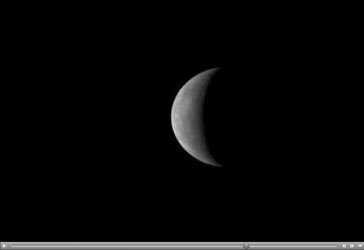 Click on the image for movie of
MESSENGER Departs Mercury

On January 13, 2008, beginning 30 hours before MESSENGER's closest approach to Mercury, the Wide Angle Camera, part of the Mercury Dual Imaging System (MDIS), began snapping images as it approached the planet. Over this period, MESSENGER imaged the planet once every 20 minutes to produce this approach sequence, which has been compiled into a movie. At the start of the movie, the MESSENGER spacecraft is about 630,000 kilometers (about 390,000 miles) from Mercury. The movie ends when MESSENGER is about 34,000 kilometers (about 21,000 miles) from Mercury and about 100 minutes before its closest approach, when it passed a mere 200 kilometers (124 miles) above Mercury's surface.

In the approach movie, Mercury appears as a sunlit crescent. During the encounter, MESSENGER passed over the night side of the planet, experienced its closest approach with Mercury, and then emerged into daylight. This encounter was the first of three flybys of Mercury planned for the MESSENGER mission.