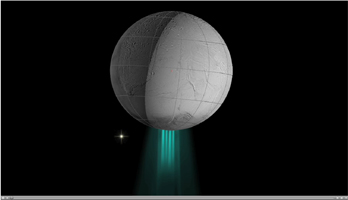 Click on the image for movie of
Stellar Data on Plume

New structure, density and composition measurements of Enceladus' water plume were obtained when the Cassini spacecraft's Ultraviolet Imaging Spectrograph observed the star zeta Orionis pass behind the plume Oct. 24, 2007, as seen in this animation.

Changes in the starlight as it dimmed while passing through the plume allowed the spectrograph to identify the plume's physical and chemical composition. The spectrograph detected four high-density gas streams composed of water vapor. The density of the water vapor is twice that of the broad plume of gas that surrounds each jet.

This measurement confirms the theoretical analysis performed prior to the flyby that showed it was safe for Cassini to fly very closely past Enceladus, even through part of the plume, during the March 12, 2008 flyby.

The Cassini-Huygens mission is a cooperative project of NASA, the European Space Agency and the Italian Space Agency. The Jet Propulsion Laboratory, a division of the California Institute of Technology in Pasadena, manages the mission for NASA's Science Mission Directorate, Washington, D.C. The Cassini orbiter was designed, developed and assembled at JPL. The ultraviolet imaging spectrograph was designed and built at, and the team is based at the University of Colorado, Boulder.

For more information about the Cassini-Huygens mission visit http://saturn.jpl.nasa.gov . The ultraviolet imaging spectrograph team home page is at http://lasp.colorado.edu/cassini .