‘Marsshine’ on Shadowed Part of Phobos 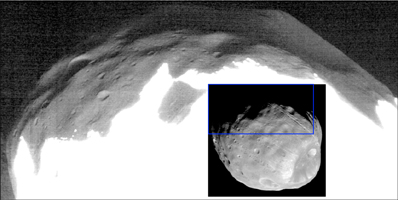 The High Resolution Imaging Science Experiment (HiRISE) camera on NASA's Mars Reconnaissance Orbiter took two images of the larger of Mars' two moons, Phobos, within 10 minutes of each other on March 23, 2008. This is a portion of the second one, enhanced to bring out detail in areas of Phobos that were not illuminated by the sun when the image was taken. Craters are visible due to faint illumination from reflected light off of Mars ("Marsshine"). This is directly analogous to "Earthshine," the reflected sunlight from our planet that illuminates the dark side of Earth's moon. The enhancement to show details in the shadows also washes out detail in the sunlit areas in the lower portion of the image.

The ability to see features on Phobos illuminated by Marsshine demonstrates the high sensitivity of the HiRISE camera. This image is in the HiRISE catalog as PSP_007769_9015.

NASA's Jet Propulsion Laboratory, a division of the California Institute of Technology in Pasadena, manages the Mars Reconnaissance Orbiter for NASA's Science Mission Directorate, Washington. Lockheed Martin Space Systems, Denver, is the prime contractor for the project and built the spacecraft. The High Resolution Imaging Science Experiment is operated by the University of Arizona, Tucson, and the instrument was built by Ball Aerospace & Technologies Corp., Boulder, Colo.