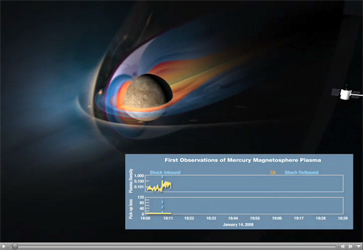 This animation shows a conceptual sketch of Mercury's magnetosphere at the time of the MESSENGER flyby. The graphs at the bottom show observations made by the Fast Imaging Plasma Spectrometer (FIPS) portion of the Energetic Particle and Plasma Spectrometer (EPPS) instrument as the spacecraft followed the indicated trajectory. The top plot depicts the low-energy plasma of solar wind origin, and the bottom plot shows heavy ion intensities associated with the planet. This flyby was the first survey of the ion plasma of Mercury's space environment. The positions at which the spacecraft first crossed the "bow shock" of the magnetospheric interaction with the solar wind, passed closest approach to the planet, and crossed the outbound bow-shock crossing are indicated.

These results show the expected increases in solar wind plasma density downstream of the bow-shock boundary, as well as significant solar wind plasma densities within Mercury's magnetosphere close to the planet. The latter measurements provide definitive evidence that Mercury's magnetosphere—despite its small size—is not a vacuum but hosts significant densities of heated solar wind plasma. The plasma affects the magnetic field, contributes to the "space weathering" of the planet's surface, and sputters material from the surface to populate the exosphere. This first detection of heavy pick-up ions, Na+ and other species, near Mercury is consistent with their production by ionization of exospheric neutral species. This complex system and all of its time variations will be studied during the next two MESSENGER flybys as well as throughout the orbital phase of the mission.