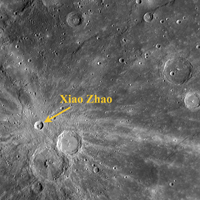 Recently named after the 12th century Chinese artist, Xiao Zhao crater on the central left side of this image is small in comparison with many other craters on Mercury and even with many other craters in this scene. However, Xiao Zhao's long bright rays make it a readily visible feature. The fresh, bright rays, which were created by material ejected outward during the impact event that formed the crater, indicate that Xiao Zhao is a relatively young crater on Mercury's surface.