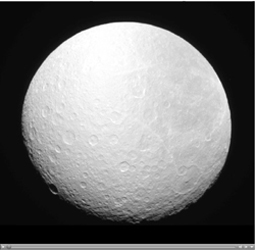 The Cassini spacecraft's narrow-angle camera captured Saturn's moon Rhea as it gradually slipped into the planet's shadow—an event known as "ingress" —on Aug. 19, 2008.

Seventeen consecutive clear-filter images are in this movie showing an eclipse ingress across the Saturn-facing hemisphere of Rhea. Because sunlight still penetrates the planet's upper atmosphere and the sun has a finite size, the shadow of Saturn cast onto Rhea does not form a sharp line.

North on Saturn and Rhea is up in these images. The shadow moves from the upper left to lower right (northwest to southeast) because the moon's orbital plane around Saturn is inclined relative to the path, called the ecliptic, that the sun takes around the moon as viewed from its surface.

With Saturn approaching its August 2009 equinox in its orbit around the sun, the motion of the planet's shadow during future eclipses will trend more towards west-to-east (left-to-right) on ingress. After 2009, the trend will reverse, and the motion of Saturn's shadow will become more southwest-to-northeast, until the inclination of the orbital plane (relative to the ecliptic) becomes so large that Saturn's shadow no longer intersects with the orbits of moons such as Rhea and eclipse "season" ends.

The first frame of the movie displays Rhea's hemispherical albedo (brightness) dichotomy. The left half of the moon, its leading hemisphere, is remarkably brighter than the right half, its trailing hemisphere. Saturn's E-ring particles, which have their origins in the famous jets of the small moon Enceladus, preferentially impact Rhea's leading hemisphere, churning up its surface and enhancing its . Saturn's extremely tenuous E ring is so expansive that at least 11 moons orbit within it.

These images were acquired by NASA's Cassini spacecraft at a solar phase, or sun-Rhea-spacecraft, angle of about 28 degrees at a distance of approximately 450,000 kilometers (280,000 miles). Image scale is around 2.7 kilometers (1.7 miles) per pixel.