‘Tis the Season for Spokes 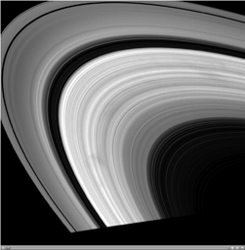 Dark spokes dance around Saturn's B ring in this series of movies comprised of images taken with Cassini's wide-angle camera.

As Saturn nears equinox in August 2009 and the sun angle on the ring plane decreases, spokes become common sights in Cassini images, just as they were in Voyager images (See PIA02275 ). The planet's orbital period is 29.5 years, so Saturn has nearly made one complete trip around the sun since the flybys of the two Voyager spacecraft in 1980 and 1981, allowing Cassini to closely match Voyager's viewing geometry.

Each of these five movies shows the sunlit side of the rings at low solar phase, or spacecraft-rings-sun, angles. The spokes appear dark against Saturn's B ring at low phase angles because the particles within them scatter light more efficiently in the forward direction (away from Cassini) than the surrounding larger ring particles. In the opposite viewing geometry, at high phase angles, spokes appear bright relative to surrounding ring particles (See PIA07807 ).