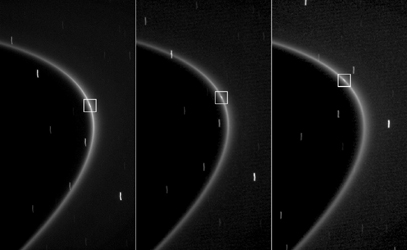 This sequence of three images, obtained by NASA's Cassini spacecraft over the course of about 10 minutes, shows the path of a newly found moonlet in a bright arc of Saturn's faint G ring.

In each image, a small streak of light within the ring is visible. Unlike the streaks in the background, which are distant stars smeared by the camera's long exposure time of 46 seconds, this streak is aligned with the G ring and moves along the ring as expected for an object embedded in the ring.

Cassini scientists interpret the moving streak to be reflected light from a tiny moon half a kilometer (a third of mile) wide that is likely a major source of material in the arc and the rest of the G ring. Debris knocked off this moon forms a relatively bright arc of material near the inner edge of the G ring, the most visible part of the ring in these images. That arc, in turn, leaks material to form the entire ring.

These images were captured by Cassini's narrow-angle camera on Oct. 27, 2008. The first image (left) was taken in visible light, the second image (middle) was taken in red light, and the third image (right) in near-infrared light centered at a wavelength of 750 nanometers. Image scale for the first image is 7 kilometers (4 miles) per pixel. The second and third images were taken at reduced resolution. These spatially compressed images were captured at 14 kilometers (9 miles) per pixel and then displayed at a size equal to the first image. This view looks toward the un-illuminated side of the rings from about 5 degrees above the ringplane. The view was acquired at a distance of approximately 1.2 million kilometers (751,000 miles) from Saturn and at a sun-Saturn-spacecraft, or phase, angle of 23 degrees.