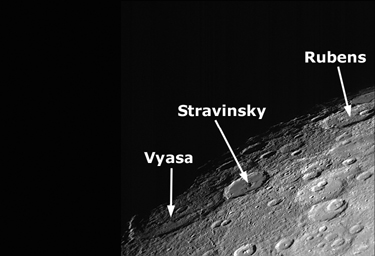 By examining the characteristics of craters and their relationships to each other, geologists are able to unravel the history of Mercury. This image shows a northern portion of Mercury's surface, looking at the terminator (the transition from the sunlit dayside to the dark night side of the planet). The crater in the lower left, Vyasa, has a rough floor, with other craters superimposed onto it, indicating that this crater is relatively old. In contrast, the neighboring crater, Stravinsky, has a much smoother floor and appears to overlap the rim of Vyasa, suggesting that this crater is relatively younger. These craters appear to be aptly named to support this relative age relationship; Vyasa is named for the ancient Indian poet from about 1500 BC, while Igor Stravinsky was a 20th century Russian-born composer. The nearby crater Rubens, named for the 17th century Flemish painter, may indeed represent an event intermediate in time between Vyasa and Stravinsky.