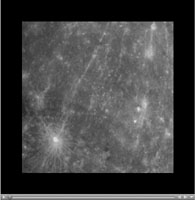 As MESSENGER completed its second successful flyby of Mercury, the NAC took images of the planet every 5 minutes as it receded in the distance. In total, 124 images were compiled sequentially to produce this movie. At the start of the movie, MESSENGER was about 93,000 kilometers (about 58,000 miles) from Mercury, and the first image has a field of view of about 2,500 kilometers (about 1,500 miles) in width. At the end of the movie, the MESSENGER spacecraft was about 288,000 kilometers (179,000 miles) from Mercury.