A Movie of Magnetometer Measurements from the Second Mercury Flyby 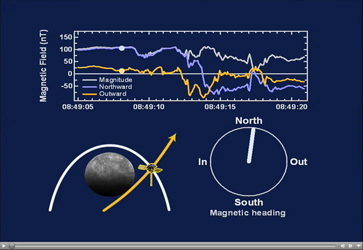 This animation is a zoom-in of MESSENGER's second Mercury flyby outbound magnetopause crossing, showing nine seconds of magnetic field data at high resolution sampled 20 times per second. Data were obtained at the point shown by the spacecraft in the lower left as it crossed the magnetopause (white trace). The strong magnetic field directed inward at the magnetopause (18:49:14 UT) indicates that Mercury has the most intensely driven magnetosphere system ever observed in situ. Additional figures generated using MAG data show the magnetic field strengths (see PIA11404 ) and compare the interactions between Mercury's magnetosphere and the solar wind (see PIA11408 ) during both of MESSENGER's two Mercury flybys.