A Movie of MESSENGER’s Observations of Mercury’s Exosphere 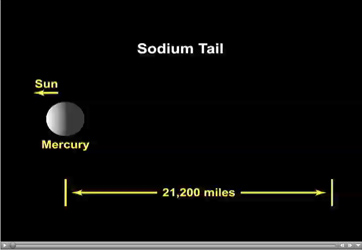 This animation illustrates how MASCS observed the tail region of Mercury's exosphere during the mission's second flyby of the planet. As MESSENGER flew toward Mercury on the inbound leg of its trajectory, the spacecraft rotated back and forth about the Sun-Mercury line. This nodding caused the MASCS instrument viewing direction (i.e., the direction the instrument is pointed) to move alternately north and south, building up an image in a whiskbroom fashion. At two points, the scanning sequence was briefly interrupted while the spacecraft reoriented to take an image; MASCS observations continued during these times, but the observation direction changed. After all the observations were processed, they were then converted to an image of the emission intensity. In these images, the color scale indicates relative intensity as a function of spatial position. Images of the emission intensity of sodium and calcium (see PIA11402 ) have been produced from data acquired during MESSENGER's second Mercury flyby and compared to similar sodium emission intensity measurements from the mission's first Mercury encounter (see PIA11407 ).