A Color Movie of Mercury’s Surface 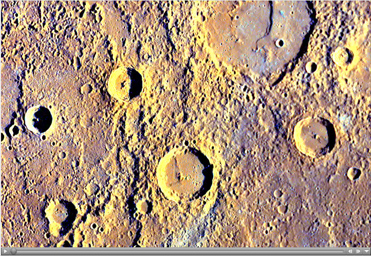 A set of five 11-band images was captured by MESSENGER just after the spacecraft crossed the night/day line (the "terminator"), which are the highest-resolution color images ever obtained of Mercury's surface (see PIA11410 ). At the beginning of this movie, it is dawn in that region of Mercury, and the Sun is just off the horizon. The long shadows that are cast by crater walls exaggerate the ruggedness of the terrain and highlight variations in topography. Though Mercury's true colors are subtle (see PIA11364 ), the 11 color bands of MDIS were combined in a statistical method used to highlight differences in color units. Older, low-reflectance, and relatively blue material is encroached by younger, relatively red smooth plains. Several lobate scarps or cliffs are observed, which are places where compressional stresses caused Mercury's crust to fracture and shorten.