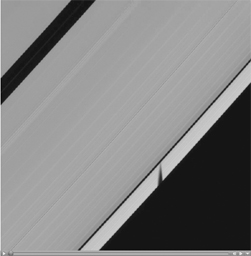 The beauty and spectacle of celestial motion is captured in this short movie of a moon shadow darting across Saturn's rings.

Over the span of about an hour, Cassini's camera tracked the shadow of the small moon Epimetheus, orbiting beyond the rings, as it moved across Saturn's A ring in this movie made up of 21 images.

As Saturn approaches equinox, the angle at which the ringplane is inclined away from the sun will continue to decrease until August 2009, when equinox will bring about an alignment of the plane containing the rings with the rays of the sun. Only around the time of equinox is a moon's shadow cast on the rings rather than the planet. Between now and equinox in August, the shadows cast by the moons on the rings will grow longer with time.

Cassini scientists planned a series of observations to chronicle these sights, knowing that the resulting images could hold valuable information about vertical displacements in the rings and the orbital inclinations of the shadow-casting moons. These planned images of course hold another reward: the simple but spectacular depiction of the path of sunlight across the solar system.

The movie images were taken in visible light with NASA's Cassini spacecraft narrow-angle camera on Jan. 16, 2009. This view looks toward the sunlit side of the rings from about 53 degrees below the ringplane. The view was acquired at a distance of approximately 945,000 kilometers (587,000 miles) from Saturn and at a sun-Saturn-spacecraft, or phase, angle of 68 degrees. Image scale is 5 kilometers (3 miles) per pixel.