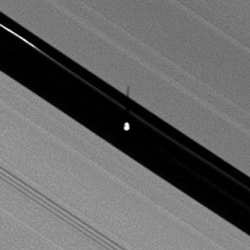 In the center of this image, the shadow of Pan is a short streak thrown over the edge of the A ring where Pan travels its path through the Encke Gap. A second version of this image has been included to focus on Pan's shadow. The image has been scaled to three times its original size and cropped as shown in Fig. 1.

As Saturn approaches equinox, the angle at which the ringplane is inclined away from the sun will continue to decrease until August 2009, when equinox will bring about an alignment of the plane containing the rings with the rays of the sun. Only around the time of equinox is a moon's shadow cast on the rings rather than the planet.

Between now and equinox in August, the shadows cast by the moons on the rings will grow longer with time.