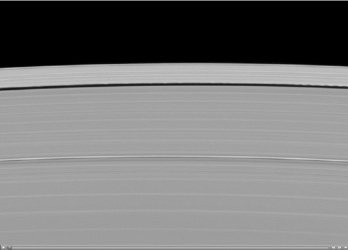 The little moon Daphnis and its entourage of waves on the edge of the Keeler gap in Saturn's rings cast long shadows in this movie created from images taken as the planet approaches its mid-August 2009 equinox.

This movie is a sequence of 10 images, each taken about one minute 30 seconds apart. The small moon Daphnis (8 kilometers or 5 miles across) occupies an inclined orbit within the 42-kilometer (26-mile) wide Keeler Gap in Saturn's outer A ring. Recent analyses by imaging scientists published in the Astronomical Journal illustrate how the moon's gravitational pull perturbs the orbits of the particles forming the gap's edge and sculpts the edge into waves having both horizontal (radial) and out-of-plane components.

These images of shadows cast onto the rings and others like it (see PIA11656 and PIA11653 ) are only possible around the time of Saturn's equinox which occurs every half-Saturn-year (equivalent to about 15 Earth years). The illumination geometry that accompanies equinox lowers the sun's angle to the ringplane and causes out-of-plane structures to cast long shadows across the rings.

Bright specks in some movie frames are stars in the background.

This view looks toward the sunlit side of the rings from about 25 degrees below the ringplane. The images were taken in visible light with the Cassini spacecraft narrow-angle camera on May 25, 2009. The view was obtained at a distance of approximately 768,000 kilometers (477,000 miles) from Saturn and at a Sun-Saturn-spacecraft, or phase, angle of 52 degrees. Image scale is 4 kilometers (3 miles) per pixel.