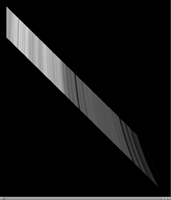 Part of the shadow of Saturn's moon Mimas appears as if it has been woven through the planet's rings in this unusual series of images from Cassini. Together, the sequence of frames comprise an unusual demonstration of the varying particle density across the rings.

In these images, which were combined to create both a mosaic and a movie, the Cassini spacecraft looks toward the unilluminated side of the rings from about 61 degrees above the ringplane. Mimas' shadow, seen in multiple locations simultaneously in the mosaic, lies across the inner B ring, C ring and even the very faint D ring. The inner B ring is in the top left, and the C ring is in the middle of the image. The transparent D ring is faintly visible in the dark area in the lower right. Mimas is not shown.

The densest parts of the B and C rings, seen as bright stripes across Mimas' shadow, do not let much sunlight pass through to the spacecraft's camera. Consequently, one might expect these dense areas to appear dark because they are on the dark side of the rings. But these areas, particularly the inner B ring in the upper left of the image, appear brightly lit, even where Mimas' shadow crosses them. It is likely that illumination from Saturn itself and the subsequent reflection to the cameras keeps them relatively bright. As a result, the moon's shadow appears cut off and diminished in these areas.

Nineteen images, each taken about 2 minutes and 24 seconds apart, were combined to create this mosaic and movie. Contiguous images were stitched together to create a mosaic showing the whole swath of the rings across which the moon's shadow passed. One image is missing from the sequence, creating a gap in the movie.

The novel illumination geometry created as the Saturnian system approaches equinox allows moons orbiting in or near the plane of Saturn's equatorial rings to cast shadows onto the rings. These scenes are possible only during the few months before and after Saturn's equinox which occurs only once in about 15 Earth years. To see a similar image showing a different moon's shadow on the unlit side of the rings, see PIA11498 . To see movie and mosaic of Mimas' shadow moving across the sunlit side of the rings, see PIA11658 .

These images have been processed, and the faint D ring was brightened relative to the other rings. Background stars have been removed.

The image was taken in visible light with the Cassini spacecraft narrow-angle camera on April 30, 2009. The view was obtained at a distance of approximately 1.4 million kilometers (870,000 miles) from Saturn and at a Sun-Saturn-spacecraft, or phase, angle of 73 degrees. Image scale is 8 kilometers (5 miles) per pixel.