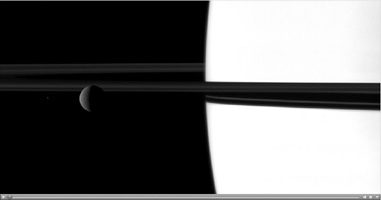 The small moon Janus overtakes the larger moon Rhea in a dance played out before Saturn and its rings.

Observations of mutual moon-crossing events like this one, in which one moon passes close to or in front of another, help scientists refine their understanding of the orbits of Saturn's moons. This movie is a concatenation of 12 still images obtained over a span of 24 minutes. The images were re-projected to a uniform view and computer interpolation was used to smooth the moons' motions between the frames.

At the start of the movie, Janus (179 kilometers, 111 miles across) appears as a small dot just below the rings on the left of the frame. The larger Rhea (1528 kilometers, 949 miles across) also starts on the left but can be seen moving more slowly across the frame. Janus is traveling almost twice as fast as Rhea with an average speed of about 16 kilometers per second (36,000 mph) compared to Rhea's average speed of roughly 8 kilometers per second (18,000 mph).

This view looks toward the northern, sunlit side of the rings from just above the ring plane.

The images were obtained in visible light with Cassini's narrow-angle camera on Nov. 8, 2009. The view was acquired at a Sun-Rhea-spacecraft, or phase, angle of 103 degrees.