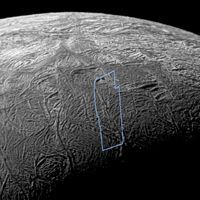 This wide-angle image shows the south polar region of Saturn's moon Enceladus and outlines the area covered by the high-resolution mosaic combining data from the imaging science subsystem and composite infrared spectrometer aboard NASA's Cassini spacecraft ( PIA11696 ). The outlined area focuses on Baghdad Sulcus, a fracture in the south polar region.

Cassini captured the data for this wide-angle image during the spacecraft's close flyby of the moon Nov. 21, 2009. This image and others from that flyby are among the best visible light images Cassini will capture of the region around the "tiger stripes," -- the fissures that spray icy particles, water vapor and organic compounds -- compounds, before the moon's south polar region enters winter darkness for the coming years.

This wide-angle view shows not only Baghdad Sulcus, but also other nearby fractures. Lit terrain seen here is on the leading hemisphere and Saturn-facing side of Enceladus (504 kilometers, 313 miles across). The south pole lies in shadow near the bottom middle of the image.

The wide-angle view was acquired at a distance of approximately 2,000 kilometers (1,200 miles) from Enceladus and at a sun-Enceladus-spacecraft, or phase, angle of 114 degrees. Scale in the wide-angle view is 116 meters (381 feet) per pixel.