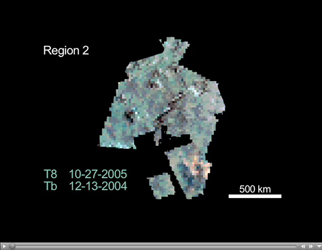 Change is detected on Saturn's moon Titan, in these three composite images from data taken during flybys in October 2005, January 2006 and March 2006 by NASA's Cassini spacecraft.

(For balanced comparison, each of the three images has been corrected by dividing it by baseline Titan data from a December 2004 Cassini flyby.) The change observed between flybys may be evidence of cryovolcanic activity—ice volcanoes—according to some Cassini scientists.

The three visual and infrared spectrometer images of the same area in western Xanadu show that a difference in brightness, or color, has occurred in the approximately five months between the first and second images shown here. This is indicative of compositional change and is interpreted by some as evidence of an eruption of volatiles such as water, ammonia and methane. Note the dark feature that appears in the second image but not the first. The feature is still present two months later in the third image and is perhaps even more pronounced.

Scientists have suspected Titan may have cryovolcanoes, and the Cassini mission has collected data from several previous flybys of the moon that suggest their existence. Imagery of the moon has included a suspect haze hovering over flow-like surface formations that some point to as signs of possible cryovolcanism.

Such volcanism could release methane from the interior, which would explain the mystery of Titan's seemingly continuous supply of fresh methane. Without replenishment, scientists say, Titan's original atmospheric methane should have been exhausted long ago.

The images are in a sinusoidal projection with central longitude at 140 degrees west and central latitude at 0 degrees with north up. The scale bar is 500 kilometers (about 310 miles). Data seen in red was taken at 2.78 microns, green at 2.01 microns and blue at 1.59 microns.

The Cassini-Huygens mission is a cooperative project of NASA, the European Space Agency and the Italian Space Agency. The Jet Propulsion Laboratory, a division of the California Institute of Technology in Pasadena, manages the mission for NASA's Science Mission Directorate, Washington, D.C. The Cassini orbiter was designed, developed and assembled at JPL. The Visual and Infrared Mapping Spectrometer team is based at the University of Arizona.