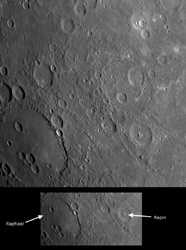 This NAC image shows two named craters on Mercury: Raphael, named for the Italian Renaissance painter and Repin, named for the Russian painter of the late 1800s and early 1900s. Raphael is being illuminated by morning sunlight on Mercury, resulting in longer shadows on the left side of the image than on the right side. Repin is the smaller of the two craters (at a diameter of 107 kilometers, or 66 miles) and has a central peak structure. Raphael is a much larger impact feature, and with a diameter of 343 kilometers (213 miles) it would normally be classified as an impact basin. Interestingly, although Raphael is considerably larger than Repin, Raphael does not show any peak structure, such as the peak rings observed in other impact basins of similar or somewhat smaller diameter, of which Raditladi is one example shown in a previously released image (see PIA10378 ). The floor of Raphael is also noticeably smooth, suggesting the presence of volcanic plains that have partially filled this basin. If the accumulated lava flows were sufficiently thick, they might have buried any original topography within the basin. Indeed, some subtle wrinkle ridges around the basin floor may hint at the location of a large interior ring of peaks that has been covered over.