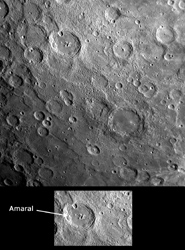 Near the top center of this image is the crater Amaral, recently named for the Brazilian modernist painter Tarsila do Amaral, who lived from 1886 to 1973 (see PIA11762 ). Amaral crater, with its smooth floor, surrounding ejecta, and small secondary craters, appears noticeably younger than the heavily cratered surface around it. Along with a smooth crater floor, Amaral also has a central peak. Bright material on this peak is of particular interest to members of the MESSENGER Science Team, as it appears to have an unusual color in images acquired in the 11 color filters of the Wide Angle Camera (WAC). In this previously released enhanced color image of Mercury (see PIA11219 ), the central peak of Amaral (just below center left) appears as a bright blue color in striking contrast to the otherwise orange tones of surface material nearby. The different color of the central peak likely indicates rocks with different chemical composition from those on the neighboring surface.