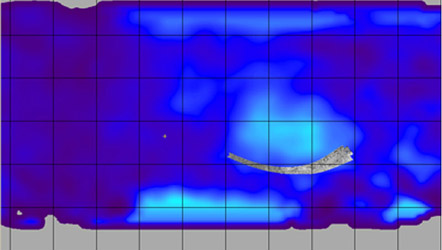 The southern edge of Xanadu, a continent-size feature on Saturn's moon Titan, is seen in this Cassini radar mapper image swath collected on Feb. 22, 2008. Xanadu is unusually bright in both infrared and radar wavelengths. Once thought to be an elevated area, Cassini measurements have shown that Xanadu is relatively flat, although it has likely been both compressed and extended by tectonic forces that are as yet not well-understood.

At left, the featureless dark plains that make up much of Titan's surface are apparent. In the center and to the right, small and then larger patches of the very bright, mountainous terrain typical of Xanadu appear, and evidence for channels can be seen. At the extreme right end of the swath is the area Hotei Arcus, distinguished by lobate features with radar-bright channels that have transported liquid northward from mountainous areas and disappear into the lobate features. A possible explanation for the lobate features is that they are cryovolcanic flows—eruptions of frozen ammonia-water slush.

This swath maps terrain from 28 degrees south latitude, 150 degrees west longitude to 28 degrees south longitude, 65 degrees west latitude, in a broad arc covering 3,450 kilometers (about 2,145 miles). Radar illumination is from the south. The inset at upper left shows the location of the swath on Titan. The swath width, from top to bottom, varies from 150 to 530 kilometers (about 95 to 330 miles), with a resolution ranging from 300 to 1,000 meters (about 300 to 1,100 yards).

For more information about the Cassini-Huygens mission, visit http://saturn.jpl.nasa.gov/ .