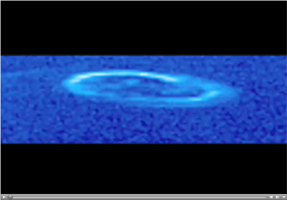 Click on the image for movie of
Ultraviolet Aurora Movie

Glowing like a neon lasso, Saturn's aurora is seen spinning above Saturn's north pole over the course of most of a Saturn day in this movie made from multiple images taken by the ultraviolet imaging spectrograph on NASA's Cassini spacecraft.

Saturn's auroral lights are the result of a rain of electrically charged particles from the magnetic bubble, called the magnetosphere, that surrounds the planet. When the particles strike gaseous hydrogen in Saturn's atmosphere, the hydrogen becomes excited and glows, creating aurora. Neon signs work in a similar way: electricity is used to excite a gas, usually neon or argon, in a tube.

Changes that occur in Saturn's magnetosphere can cause fluctuations in the aurora. Undulations in the aurora may be caused by waves moving along magnetic field lines. A surge in auroral brightness is the result of a sudden injection of particles into the magnetosphere. These charged particles come from a variety of sources, including the sun, Saturn's rings, and the water ice plume of Saturn's moon Enceladus.

Twenty-six ultraviolet images make up the movies, taken over an 8-hour and 15-minute period. (Saturn's day is about 10 hours and 46 minutes.) The images were taken May 25, 2007.

Saturn's aurora was discovered by NASA's Pioneer 11 spacecraft in 1979 and observed in the Saturn flybys by the NASA Voyager 1 and 2 spacecraft in the early 1980s. NASA's Hubble Space Telescope first obtained images of the aurora in 1994. From Cassini's always-changing orbit around Saturn, fresh observations in ultraviolet and infrared wavelengths are being combined with other data to help characterize similarities and differences among the aurorae of Saturn, Jupiter and Earth.

The Cassini-Huygens mission is a cooperative project of NASA, the European Space Agency and the Italian Space Agency. NASA's Jet Propulsion Laboratory, a division of the California Institute of Technology in Pasadena, manages the mission for NASA's Science Mission Directorate, Washington, D.C. The Cassini orbiter was designed, developed and assembled at JPL. The ultraviolet imaging spectrograph was designed and built at, and the team is based at the University of Colorado, Boulder.

For more information about the Cassini-Huygens mission visit http://saturn.jpl.nasa.gov . The ultraviolet imaging spectrograph team home page is at http://lasp.colorado.edu/cassini .