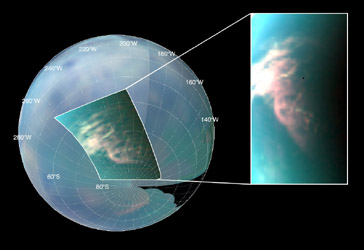 This infrared image of Saturn's moon Titan shows a large burst of clouds in the moon's south polar region.

These clouds form and move much like those on Earth, but in a much slower, more lingering fashion, new results from NASA's Cassini Spacecraft show.

This image is a color composite, with red shown at a 5-micron wavelength, green at 2.7 microns, and blue at 2 microns. An infrared color mosaic is also used as a background image (red at 5 microns, green at 2 microns, blue at 1.3 microns). The images were taken by Cassini's visual and infrared mapping spectrometer during a flyby of Titan on March 26, 2007, known as T27. For a similar view see PIA12004 .

Titan's southern hemisphere still shows a very active meteorology (the cloud appears in white-reddish tones) even in 2007. According to climate models, these clouds should have faded out since 2005.

Scientists have monitored Titan's atmosphere for three-and-a-half years, between July 2004 and December 2007, and observed more than 200 clouds. The way these clouds are distributed around Titan matches scientists' global circulation models. The only exception is timing—clouds are still noticeable in the southern hemisphere while fall is approaching.

Scientists will continue to observe the long-term changes during Cassini's extended mission, which runs until the fall of 2010.

The Cassini-Huygens mission is a cooperative project of NASA, the European Space Agency and the Italian Space Agency. The Jet Propulsion Laboratory, a division of the California Institute of Technology in Pasadena, manages the mission for NASA's Science Mission Directorate, Washington, D.C. The Cassini orbiter was designed, developed and assembled at JPL. The Visual and Infrared Mapping Spectrometer team is based at the University of Arizona, Tucson.